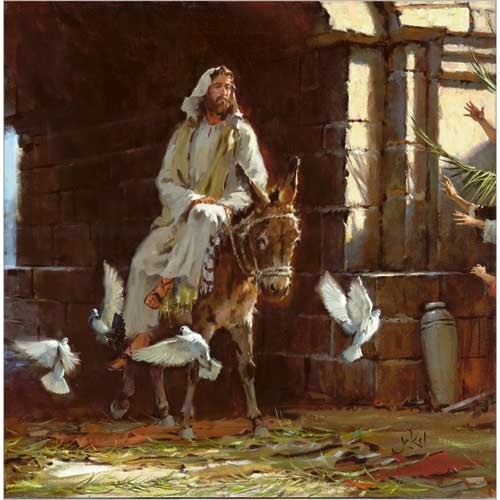 Some months ago while standing at the end of the line after our evening Wednesday church service, I distinctly felt our Lord’s presence right behind me.    He was standing in line.. at the very end after all the people had already greeted my pastor before they left for the night.           Earlier that day while at my job, I asked Jesus to be with me and I’m always asking Him to sit with me in church.

The impression of His presence was so strong that I was in awe, and felt I was being rude to Him…. like I should be talking to Him and greeting Him or something because I KNEW He was right there.       It also struck me that our Lord WOULD be at the end of the line, as this is His nature.. to never choose the first places .. to never call attention to Himself or His Majesty, but to take the lowliest places in life.    Even   when He had gone to be baptized by John the Baptist,  He waited His turn in line… and stood behind many others getting baptized first.   When John the Baptist saw Him, he was immediately convicted and told Him, “it is I who should be baptized by YOU and yet you come to me?”      Jesus, in His calm humility, gently replied,  “suffer it to be so now, to fulfill all righteousness”

This pastor has experienced lots of criticism from others in the past and is in need of our Lord’s encouragement to continue in obedience to the Lord as our pastor.   I believe this experience I had was not just for me, but also for him especially.. so that he would know that our Lord is there in church WITH him!

Shared by one of the subscribers  of Still Small Voice channel

Thank you for this message. Yes I can be acquainted with this words from the Lord. He asked me this sacrifice of giving up parents, family and country for the Gospel and go where He sends me. Giving everything up, I mean EVERYTHING. When I asked the Lord to. give me the husband He wants for me rid me of all that has to do with the opposite sex. Whaaoo Jesus took all emotions and desires for the opposite sex. I felt so FREE inside. Even if I look at a man I feel nothing. Praise the Lord.

Here in Peru where God called me to be His missionary without any support from any church or organization, I have everything that I need. A roof on my head, clothes to wear food everyday. Money enough for what I need for the day. I live under Holy Spirit directions. He aligned me with people I need to work with and when that mission is finished He takes me some other places and put people I need to be with. He told me He is preparing His Army to bring in the Last Day Harvest. He reminded me that I belong to Him alone since my eight years. He reminded me the incident when at that age I gave Him my life and received Him in my heart. So when God asks us to let go is because there is better things waiting for you in the future. Cheer up family Jesus loves us and wants only the best for each one of us. Blessings to all.